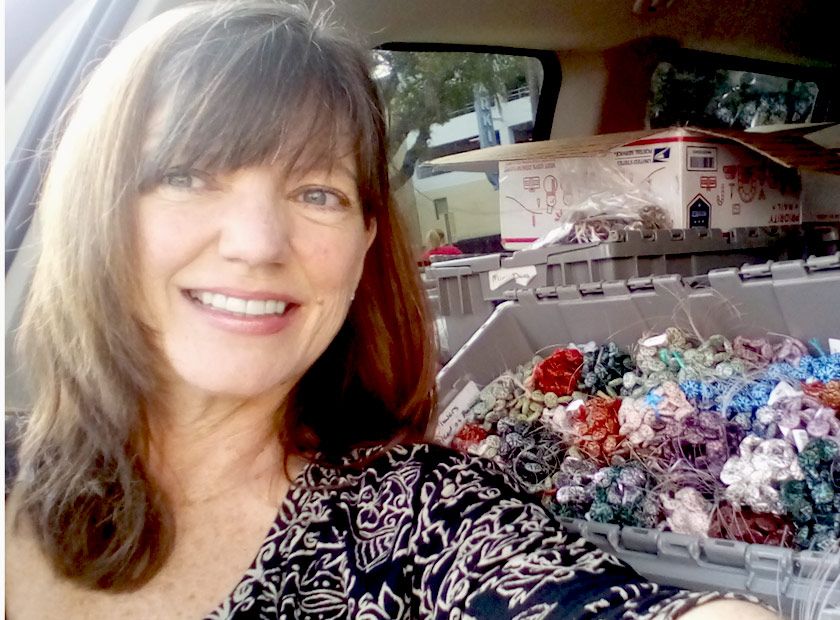 Categories: Czech Glass Beads , About us

To call her job “sales” is to seriously undersell what Shelley Ashley does for Nirvana Beads and her customers on her outreach journeys every spring and fall throughout the Southern and Midwestern United States. With Nirvana veteran Daniel Isner covering the West and company founder Nir Kronenberg still handling the East Coast – the team will rack up tens of thousands of miles before summer, take a few months to recharge and get out there again in vans groaning with fresh new Artisan Czech beads by September.

On any given day Shelley can be a stevedore, shrink, business advisor, trucker, gal pal, travel agent, and problem solver– sometimes touching on all these skills and more before noon.

Although it wasn’t exactly the intent when she loaded up her first van for Nirvana in 2009, she is continuing the long tradition of “sample men” – world-class listeners who took their bead boxes from Bohemia to all corners of the world.

It was their efforts that spread the word about the quality and variety of the Czech glass being made in the Jizerra Mountains through the 1800s and early part of the next century. They asked questions about the unique needs of their customers from the fashion houses of Paris and New York to religious and regalia needs in Africa, Asia and with Native Americans. They brought back sketches, samples and inspiration for bead makers in Jablonec.

Most of the bead and button molds being used in Jablonec today have passed through artisan families for many generations. Yet thanks to the efforts of these intrepid Czech bead evangelists, many of these molds reflect international views and symbolism common today – but unheard of at the time of steamship travel.

Shelley just started her spring tour in Florida this month in a simple panel van that gives no indication of the treasures in the dozens of 40-50 pound containers jigsawed into the tight, windowless cargo area. Shelley said the van struggles a little less going around corners when the load is lightened with sales – but only until the next stop for a UPS pick up for more inventory.

She jokes that not all her friends understand how she can enjoy the “life imbalance” that comes with her intense road schedule – but for her, it’s an unbeatable combination of a great product and a great team. She’ll see dozens of old customers and new contacts every week on an aggressive agenda booked by Donald  Moore – who supervises Nirvana’s trunk shows and much more out of the company’s Asheville, North Carolina office.  (If you are a qualified Nirvana wholesale customer who would like to schedule a visit (email him).  “I’m like a rock star,” Shelley joked. “Donald is my handler. He just sends me down the road.”

Whether stuck in Chicago’s rush hour or cruising in near solitude through the Appalachian Mountains, Shelley knows she’s never without backup.  “Nirvana has a great team,” she said. “There are no slackers. Not a one. I admire and respect Nir infinitely. He is such a smart and hardworking guy. “

She takes the challenges of flat tires and sold-out hotels in stride. “I love Czech glass and I love what I do,” she said, “People are always happy to see me.” She laughed as she recalled a now-retired customer who literally giggled with happiness as Shelley unveiled each new bead. “It was infectious; I’d always end up laughing with her.”

Sometimes customers are facing business or personal challenges, in the later case Shelley provides an ear, in the former she often has a few good ideas to share. The Georgia native was a certified gemologist who had a gem shop in Chattanooga when she decided to join the Nirvana team. “On day one of their salespeople called on me and I thought, ‘that’s the job I want’.” When she finally decided to close her shop, she called Nirvana, discovered a position was open, went to New York for a couple of days to train with Nir and hit the road.”

Her years of retail experience come in handy with little things like suggesting an opportunity for incremental sales in a bead store by moving certain items closer to the register. She is careful to never reveal the trade secrets of her customers, but always glad to tell the folks in one area about some good ideas she has seen in stores and studios far away. 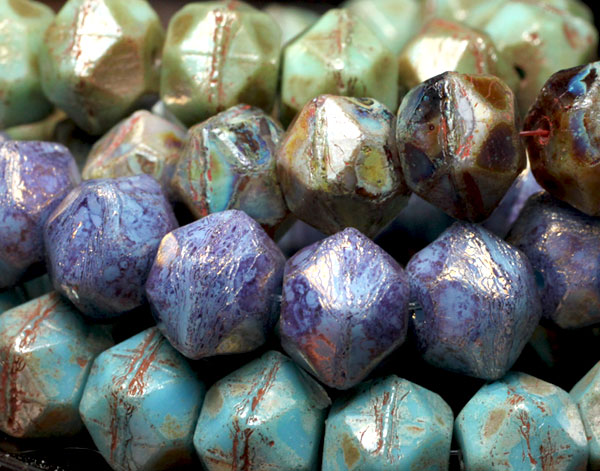 It’s an easy fit for the little girl her grandfather called “My Gypsy” for her proclivity for piling on her mother’s costume jewelry whenever she could. As a child she developed a knack for both repairing jewelry and recognizing possibilities in color and style. “I’ve always loved jewelry,” she said, “If I had to sell life insurance, I’d starve to death.”

But it’s not love at first sight with every bead.  Shelley admits she really didn’t think much of her current favorite – English Cuts. “When I saw the first samples, I thought there was something wrong with them (because of the line around the middle),” she recalled. “I said, don’t send me anymore of these messy beads.” Once she learned that the design is a replica of a specific Victorian style bead — and a huge favorite with customers looking for Bohemian and Gypsy style she saw the possibilities. “Nir told me to give it some time and he was right,” she said.

The combination of good product, good people and an occasional adventure works for Shelley.

“So many of my customers have become my friends. I’ve seen their children grow up. I know their shop pets by name,” she said. “Maybe the job isn’t for everyone. But it’s perfect for me. “